Because I haven’t been on the blog lately [which is something I am supposed to be doing every day], I am posting today a rather long analysis of a music video. Yes, it was an assignment for class. But because I think it is an important topic now a days, I am posting it for people to read it and know a little bit about how I think.

In today’s society, dominant ideas about the objectification of women are a big part of our daily lives. I will be writing about the music video of Salt and Peppa – Shoop. The reason why I chose this specific video for my analysis is because I think that this music video can provide with an idea of how both the male, but more specifically, the female body, are objectified with the purpose of giving visual pleasure. The question I am raising in regards to the concepts from the video is, in today’s society where we live in a constant hyper-sexualisation of the female body, what is the response then, when society itself tries to do the same with the male body? The hegemonic sexualisation of the body has the automatic effect on the society to perceiving the body as an object.

There were so many reactions when I first encounter this video. Aside from the fact that I had never seen it before, I was really focused on the images and how every person in the music video was physically attractive and had desirable bodies. Also, there is equality in the sense that girls are looking at the boys in the same way boys are looking at the feminine body. By not knowing the lyrics to the song, I only focused on the images and the dancing that was happening. After watching the video a couple of times, I finally realized what the lyrics were about. Salt-N-Pepa are singing about taking a certain boy home and doing sinful things to them. ”…Lick him like a lollipop should be licked…” (Shoop, Salt-N-Pepa). From my point of view, however, the relationship between seeing and listening is clear and concise since we see men ‘modeling’ for the girls on the beach and there are the girls dancing for the boys on the street or on the stage. 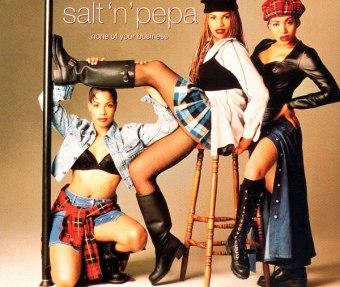 The first part of the video, which I am going to call the introduction, gives the viewer a sense of what the video is going to be about, a group of girls get off the car, to encounter a group of boys playing a game on the street to which they [the girls] are walking to and start flirting with them showing off their amazing defined body. Another part of the video I believe is key to understanding the music video along with the lyrics is almost at the end of the piece when the three girls are by the beach and one of the singers completely removes her sunglasses in order to have a better view or perception on the tremendous black men that is coming straight for them.

The targeted audience of this music video is black middle class heterosexual young men and women, with enticing bodies, whom have the ability to get any black woman/men they want. I think that this music video was created by a black male who was trying to portray the message of how black women can get any man she wants. This music video from the 90s can be appealing to the targeted audience because of its ability to portray what is believed to be the relationship between heterosexuals in black culture. It is clear how the image of the female body dancing in the streets and showing it off for men to be amused by it, makes the theme of this video clear and straight to the point of having the female body be an object of admiration.

The message that this music video is showing is how both female and male bodies are being objectified, it does a good job providing the watchers with images of almost naked bodies, which will clearly be admired by either male or female viewers. This video reflects hegemonic ideas in the sense that it shows beautiful and attractive female and male bodies since that is what people want to see and follow. A hegemonic idea is a dominant idea that has been created because of social context, which in this case is the idea of bodies, either male or female, being sexualized. This video does not rebel against hegemonic ideas since it is conforming to the sexualisation of bodies in a clear and concise way.

The way in which this video conveys ideas about gender is by presenting every gender in its specific role, men showing their muscular bodies by walking around shirtless playing basketball, while women walk around ogling them. Its effective way of portraying these hegemonic ideas makes the audience understand that that is how heterosexual couples get along. I think this video explodes gender ideals because it shows that men and women are in the same level in society, when in reality, women are the ones staying home taking care of their men, though in this video we see how women are effectively looking for men by basically throwing themselves to the sexiest men in the street. Even though this video does not really reflect on intersectionality, it can be seen how the race that rules in the video is the black race. As far as I am concern, there is only one white boy in the video that appears in the background when they are exercising by the beach.  On the other hand, this music video along with the lyrics of the song, reflect on how a black woman is feisty with her feelings towards the man she wants.

By watching this video then, we as viewers, can come into realization that the hegemonic sexualisation of the body is what makes us enjoy this music video by having the bodies as objects of visual pleasure.

Here is the video: